You are here: Home / About / History and Growth of DC

Kurt and Eric met at Southeast Christian Church in 2000 through Jeff Heisler. Jeff recommended Eric as someone to construct meatier short-term studies—to supplement the lighter short-term studies that were being offered in the Men’s Ministry. Eric added courses on C.S. Lewis, Apologetics, and Spiritual Disciplines.

In the meantime, Kurt was growing increasingly frustrated with the limited number of disciple-makers in his ministry. He didn’t have enough competent group leaders with a vision for disciple-making. Groups were led by individuals and if the leader was going to be absent, Kurt was asked to put out that “fire”. He was doing short leader trainings. However, in follow-up interviews, he found out that half of the guys were solid, but ready to lead a group like Kurt “was ready to be an astronaut”.

Something more was needed. Looking around, we couldn’t find anything that did what we thought needed to be done—to thoroughly equip people to be disciple-makers. Challenged by his administrator, Murphy Belding, we were charged in January 2002 with the task of creating a curriculum and a program that would make disciples who could make disciples.

DC: Thoroughly Equipped started in September 2002 at Southeast. Kurt started one group and Eric started another. With a broad outline of the program and staying a few months ahead in terms of the writing, a good draft of the curriculum came together—and was used on guinea pigs in the two groups. (We are so thankful for those initial graduates!)

A year later, Kurt and Eric each started another group—and enlisted Rusty Russell to start a third group. (Rusty changed ministries nine months into DC and passed his group
to Eric.) Along the way, DC was edited—substantially at first and tweaks after that: rewording questions, adding questions and articles, adding quotes, etc.

In the years that have followed, other Louisville-area churches picked up DC—and it also began to spread slowly across the country. In May 2012, we reached 1,000 graduates in total. And at our graduation in Louisville that year, we had 190 graduates representing 19 different local churches (compared to 19 graduates the first year)!

We’ve learned a lot through the process of developing DC—and Lord willing, we believe that DC is poised for tremendous growth. Kurt and Eric are thankful for the opportunity to partner in ministry with each other. We’re thankful for a church that made it much easier to develop something like DC. But the glory—and the increase—go to God the Father who extended His grace, to Christ who gave us a model for ministry, and Holy Spirit who empowers us for ministry in the Kingdom. 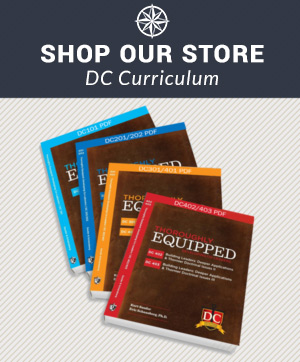 VISIT OUR OTHER MINISTRIES